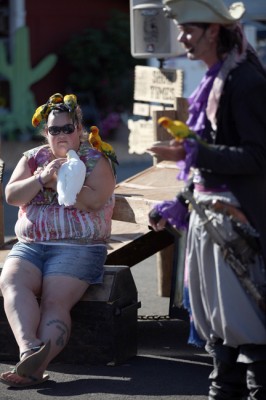 While Chris Biro (right) speaks to the audience, volunteer Karisa Vansyckle plays host to a group of parrots at the Southwest Washington Fair.

The trick involves asking audience members to hold up a dollar bill. Biro then releases one of his parrots, who flies out and snatches the green-back from the unsuspecting owners hand. The parrot then flies back to the stage and drops the dollar bill in a large glass jar.

But does he then return the legal tender? Oh no, Biro replied. You don’t understand this pirating thing, do you? 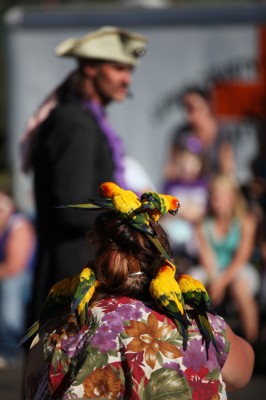 A group of sun conure parrots perch on the head and shoulders of Karisa Vansyckle, a volunteer from the audience.