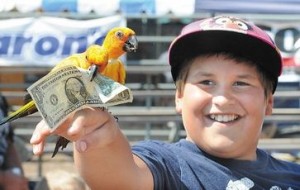 “I love parrots,” Brittanny Pohlman said. “I think it’s amazing that they come get the money.”

The Pirate’s Parrot Show was a hit for those visiting the summer fair on its last day. Dressed in pirate’s costumes, the owners of the parrots paraded back and forth on the stage as various parrots flew into the audience or circled around The Expo, squawking overhead.

A sailing ship in the background enhanced the pirate’s theme.

Pohlman, an 18-year-old from Central Point, has her own parrot, Alejandro, which she said enjoys shopping with her at the mall.

“My parrot snuggles on my shoulders and says, ‘I love you,’ ” she said.

Read the rest of the article at the Mail Tribune; Southern Oregon’s News Source!

Find out More About Us

Find out About our Work