The Thick Billed Parrot, also known as the American Parrot, used to call the Southwest its home, but is now found only in Mexico. Rodeo, New Mexico resident Chris Brio wants to bring them back to the Chiricahua Mountains. 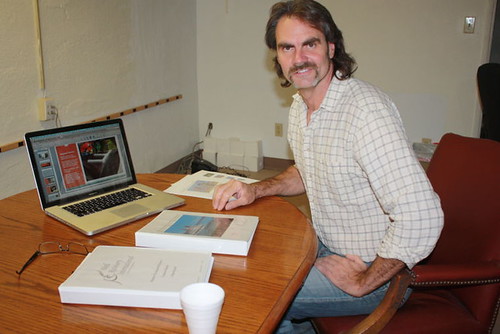 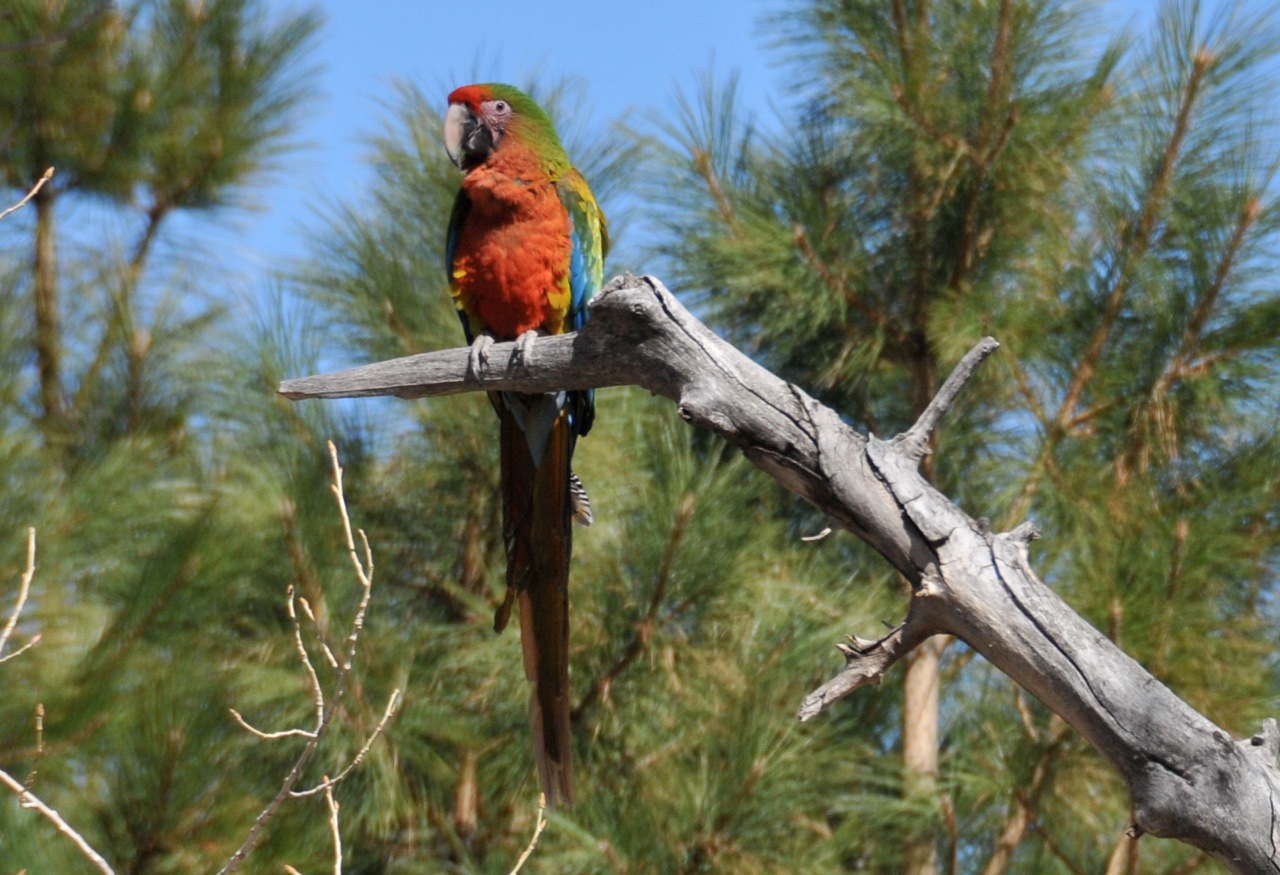 Chris Biro is dedicated to saving endangered Arizona parrots, but is getting no government help.

An example of an American Parrot – the Thick-billed Parrot – which bird training expert Chris Biro, of Rodeo, N.M., hopes to someday re-introduce into the Chiricahua Mountains near Willcox.

The Thick-billed Parrot, sometimes called the “Arizona Parrot” or the “American Parrot,” by enthusiasts who wish to see the parrot restored to the United States, was native to Arizona and New Mexico until the early 20th century, according to the National Audubon Society, he said.

Now, only found in Mexico, the parrots are gone from Arizona and New Mexico, Biro said.

He is “fighting to recover” this vanishing bird by establishing a breeding program  in the Chiricahua Mountains, southeast of Willcox, with the long-term goal of helping wildlife officials re-introduce them into the wild.

Chris BiroBiro, who hails from Rodeo, N.M., is the director of the 501(c)3 nonprofit organization, “Bird Recovery International (BRI).”

He spoke with the Range News the day he met with local officials from the Arizona Department of Game and Fish (AGFD), who urged him to appear before its Commission’s meeting on Dec. 6-7, in Phoenix.

Biro described these local officials as “nice guys,” whom he believes would like “to help me do this, but feel like their hands are tied.”

“Two government offices in Arizona appear to be saying ‘No,’ to Chris’ permitting the birds for breeding in order to avoid hassles,” she said.

“Some of these older birds kept in private hands have poorly kept histories, and Arizona has no policy that allows their permitting,” said Woodman, adding, “So the birds are supposed to leave the state rather than be used to save the species.”

Biro was kept waiting for initial response from the U.S. Fish and Wildlife Service’s (USFWS) regional office in Phoenix for a full calendar year, said Woodman, adding that office eventually directed him to AGFD, which “refuses to grant permits so Chris can possess and breed these birds” in Arizona.

“Chris reports that he has been repeatedly given bad information, left waiting for weeks for responses, and each day that passes more of these birds die of old age,” she said.

In an Aug. 2 letter, AGFD denied Biro’s application for a wildlife holding license, and Biro is currently appealing that decision.

The letter cites Arizona statute, that “no person shall import or transport into the state or sell, trade, or release within the state or have in their possession any live wildlife, except as authorized by the AZGF Commission.”

Only the Commission may give Biro permission to import his endangered species, it said.

The letter also said that the “lawful status” of Biro’s parrots cannot be determined.

“You stated that two of the birds came from a breeder in Arizona, and we do not have any record of the individual who possessed Thick-billed Parrots from Apache Junction,” the AGFD letter said.

The letter goes on to say that “after speaking with Utah, I learned that you contacted Utah DNR after you left the state, attempting to acquire permits from Utah.”

“As for your second set of birds, we do not have any way of determining if the birds were lawfully bred or possessed in their home state of South Carolina.”

Biro explained that “lawful status” is quite hard to determine.

“The situation is complicated, because officials in different states are often unfamiliar with Thick-billed Parrots, and those who privately breed and keep the birds in captivity are fearful of the government because unclear government policies come with fines and even jail times,” he said.

Biro gave the example of when he had the parrots in Utah, and contacted the relevant government office several times.

The person Biro spoke with told him the parrots did not require permitting in Utah, but to his surprise, Arizona required that he show permits for having the birds in Utah, he said.

A second time, he contacted Utah authorities who had changed their statements and said that the birds did require permits, Biro said.

Despite the phone records he claims to have, Utah officials reported to Arizona that Biro never contacted them while in Utah, he said.

Such “nightmares” have left his efforts in the lurch to find privately held birds and place them in breeding situations, Biro said.

“When I received birds from a breeder in Arizona, the state had no record of those birds, and, therefore, would not permit them,” he added.

In his four-page letter of appeal, Biro said that if the state of Arizona “denies me the right to own birds that I have legally acquired, they are treading into the territory of civil rights violation;” particularly the presumption of innocence and the right to own property.

“This is especially worrisome because the permit denial is based on a legally perverse presumption of guilt,” he said.

“Because there is historically poor record-keeping for this animal population, I am a smuggler and therefore denied permits, and my right to possess these birds as property in the state of Arizona,” said Biro, adding, “You cannot call me a criminal and deny me my property without showing any violation of a moral or ethical code.”

In his letter of appeal, Biro described himself as currently “the loudest voice actively pursuing research and conservation efforts for recovering Thick-billed parrots within the United States.”

“This is why four Thick-billed Parrots have been gifted to me thus far, with another young bird promised as a gift for this coming summer, and a few more in holding patterns as the owners watch to see if this project will develop further,” he said.

“However, without permits, everyone waits for the birds to die of old age and the species to end under the weight of bureaucracy.”

“Instead, I will focus on why denial of my permitting is legally wrong and backward to the mission of Fish and Wildlife to conserve and protect our country’s precious natural resources,” he explained.

Biro gives three reasons for the appeal, saying that he is doing so legally to maintain his rights, and because “there are no reasonable grounds for denying my appeal based on a fear of smuggling.”

The third reason is that “there are not enough of these birds left in existence to deny breeding efforts and population management,” he said in his letter of appeal.

During his research into the parrot’s history in the U.S., Biro recently discovered “some evidence that suggests the local Apaches had a close relationship with the Thick-billed Parrot, such that the birds actually learned Apache phrases from being so near to the native people.”

He found two historical accounts, written between 1830 and 1918, of these parrots “speaking a language not English and ‘not Mexican,’ and to be very friendly with humans, even following people around,” said Biro, explaining that the birds “are not naturally friendly to humans any more so than any other species of parrot.”

The parrots can “easily learn to be friendly with humans through continued contact” with those who “offer them support and respectful interaction, which would account for the language they are reported to speak,” he said.

“It would seem the Thick-billed Parrot had a close relationship with the native people, whether they were fed and respected as sacred animals or possibly due to some being captured as babies, something caused them to follow people and utter human sounds,” Biro said.

Evidence from the Mimbres region in southeastern New Mexico suggests that these birds were considered sacred by the native people, he explained.

“This may suggest that the people in nearby areas had a similar respect for this bird that could learn to speak their language,” Biro said.

“But when the native people were removed by the government, then the Thick-billed Parrot only met with trigger happy white people with guns, and were soon shot in large numbers until they were here no more,” said Biro, adding, “It would appear that when the government relocated the Apache from this area, they set the stage to eradicate the Thick-billed Parrot, as well.”

He said that the white people were the early settlers who had “no connection to nature, having distanced themselves from the land by making everything of value in their lives coming from factories.”

Logging in Mexico “has nearly completed the job of eradicating this wonderful species of parrot” there, as well, he said.

“Evidence shows that they once lived in huge numbers – the mountains were alive with the parrot – and roved into Arizona, New Mexico, Utah, Colorado, and Texas, sometimes remaining for more than a year in one place,” said Biro.

Biro said this evidence includes observations made by Spaniards in 1583, who saw the birds near Sedona and Flagstaff; an account in the Aug. 1, 1909 edition of the “Salt Lake Herald,” which reports sightings of a “goodly number” of them visiting the Utah Valley via Spanish Fork Canyon near Provo;  and records from ornithologist John J. Audubon himself of finding a specimen near El Paso, Texas, in 1827. We also have found records of a 1884-1889 sighting in New Mexico of Thick-billed parrots filling a tree a “some considerable distance north of the Mexican boundary”. This sighting appears to counter the current assumption that the artifacts and Thick-billed parrot remains buried in native American sites in New Mexico were brought to these Puebloan sights through human transport as part of trade. This sighting establishes flocks of the birds did in fact visit west central areas of New Mexico thus establishing a local source of wild birds for the native people to draw from rather than reliance on human trade.

Biro is seeking further information about the Apache and Thick-billed parrot relationship.

“We need to locate more records of any kind that support the close connection the Apache had with this parrot,” he said.

Chris Biro is scheduled to make a presentation entitled, “The Arizona Parrots’ Past and Future,” at 6 p.m., on Friday, Sept. 27 in the Portal Rescue Classroom, in Portal.

See this story on the Sierra Vista Herald website:

See this story on the Willcox Range News website: